” Where are you going?” I asked as she walked by me.

” I think I need to bring something,” she said to me, ” like a present, a gift for Natalia.   Is there a mall around here?”

” But she designed my dress and I think it’s soooo beeeootiful!” she said,” don’t you think?”

We both looked at the drawing and compared the details on the drawing with her dress.   “So, what do I bring her? ” she persisted.

“How about you bring her your smiling self, maybe unlimited hugs and attention? ”  I suggested, ” I think she would really appreciate that.”

After a long pause, he slowly said, ” I am Mirza.  I speak English, German, all Neo-Latin languages, Russian and Hindi, Sino-Tibetan languages, including Mandarin and Cantonese, Semitic languages and Bantu languages.” And then he added, ” I am fine.”

“Si,” and then he said, ” Italian is not your best language. What other languages do you speak?”

” Uh, a little French and Mandarin,” I quickly added, “but they are also not my best languages.”

He nodded.  Then he looked down his arms.  “What am I holding?” 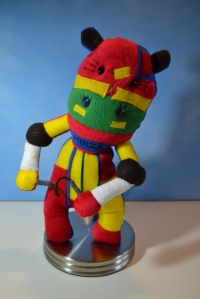 I watched him study them.  He said,  ” Nunchaku is a traditional Okinawan weapon consisting of two sticks connected at one end with a short chain or rope.  It was popularized by Bruce Lee in his movies.”  And he added quietly, ” cool. ” 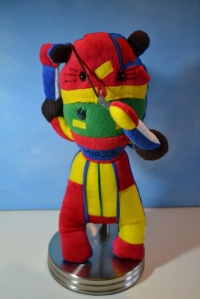 He struggled a bit with them at first, but within five or maybe ten minutes, he was skillfully swinging them around his head and behind his back, as he danced around the table and even kicked a few times.  He narrowly missed my head twice, and after the third time, I caught a nunchaku in mid-air and said, “look, you’re going to promise me one thing,”

I raised an eyebrow.  “Okay, promise me those two things.”

” I promise.”  He then added, ” you do know that my nunchaku is made of yarn and felt?”

I blinked at him twice.  He’s a smart one, this Mirza. 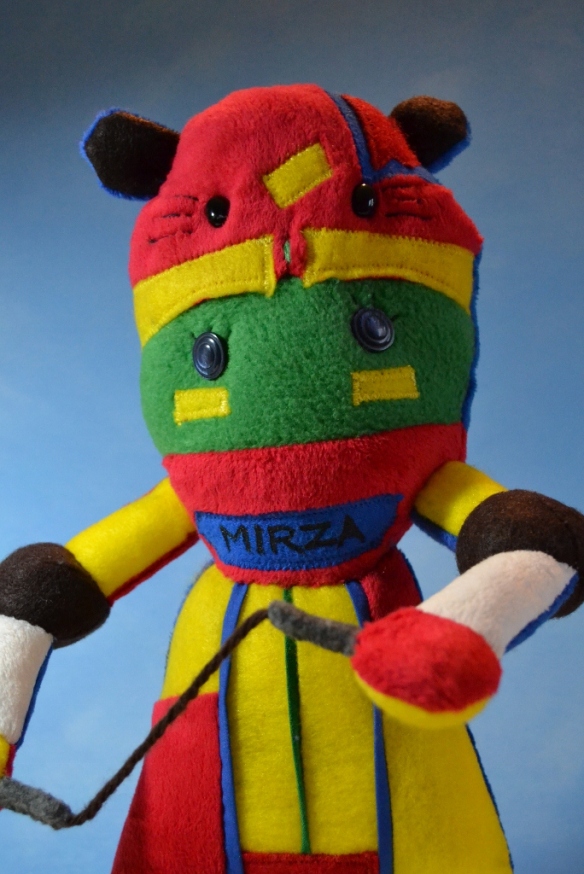 “What are you doing?” I asked the little colourful cat strutting on my table.

“I’m practicing.  One. Two. One. Two.”  She began humming as she kicked her legs.

“Practicing what?” I tossed some fabric scraps into my wastebasket.   Man, my studio gets messy fast.

“I’m practicing my Act,” she said, looking at me, “you know?  The one I’m going to do as a surprise for Paige.  I want to knock her socks off!”

The cat began.  She sashayed along the length of the table, picking up some speed as she neared the edge and then twirled and slid back to center stage, all the while humming what sounded like Mack The Knife.  Then she hopped up and down a couple of times before attempting a front aerial and crashing down onto her head.   I ran to her, picked her up, and asked if she was okay.

“You know you don’t have to try so hard,” I said, smoothing her tail, “just be yourself.  Paige is going to love you no matter what.”

She looked at me a little sceptically, shrugged and then nodded.  She hopped up with a smile.

” A friend,” I answered as I helped him to sitting position.

” How did I get here? ” he looked around my studio, in wonder. 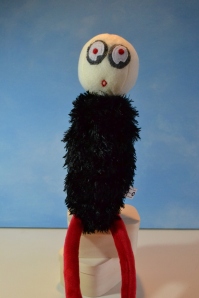 He looked at it for a long time, slowly understanding that this was what he looked like, before asking, “Is Mia a friend?”

He began to shudder, perhaps from the cold, so I wrapped a scarf around him.

He nodded. ” I’m actually shaking because I’m feeling excited. Where is Mia?” he asked.

” Mia will be excited to see you too,”  I said,  ” it’s a bit of a journey for you, but hopefully it won’t be long before you two connect. ”

” A journey?” he looked nervous.

” Look at it as an adventure.  I mean your whole life now, ahead of you, it’s an adventure!”  I smiled at him.

He carefully put his hands together and said, ” Okay, I think I’d like some of that.”

One of my earliest memories was begging my mother to draw The Pretty Lady.  With pen or pencil in her perfectly manicured hands, my mother would start by drawing out an oval shape and then add swirls that became luscious lashes around almond shaped eyes followed by a small dainty nose and mouth and finished with long wavy hair cascading down or swooped up in a bun, with tendrils down the sides of her face.  I demanded this drawing over and over again, until finally one day, my mother, much exasperated, said no, she was tired of drawing The Pretty Lady.  So I began.  I drew the same princess over and over again, putting all my little girl desires into those drawings.

I don’t have any of these drawings from my childhood.  My mother didn’t think they were worth keeping, not until I was in my teens and drawing more “seriously”.  Then she insisted I start saving the drawings.  They’re somewhere in the archives (my dusty crawlspace), mottling away.   I am sorry that I don’t have any of the earlier drawings – of the princess.  Maybe that’s why I like children’s drawings so much.  Maybe that’s why I want to make softies out of them. 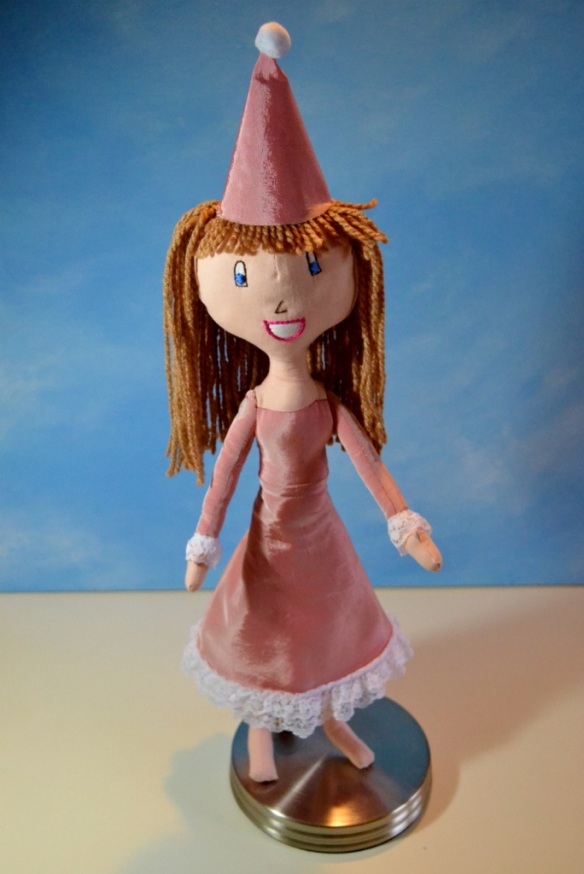 Upon further inspecting her drawing, Maeve realised that she forgot to colour the eyes (blue) and mouth (pink). Her mother reassured her that I’d be able to handle that change.

Listen.  Do you hear that?  It’s the chatter of happy crafters, excited and ready to custom make plush creations for children (and anyone) with a drawing and a wish for a cuddly keepsake.

These softie-makers are independent craftspeople, located in the United States, Canada Australia and Europe, who are ready to deal with you directly.  They have their own websites, pricing, payment methods and turnaround time.  I hope you visit their websites and send them your drawings for quotes.  Because it’s time to spread the joy!

To find them, click on  the link to The Other Talented Softiemakers

Dear people who have written me or sent me a drawing, do you feel like I’m ignoring you?

So, things are going to change.  (They have to, don’t you think?)  Next Thursday, on March 1st, I will have a list of other, independent and talented softiemakers on the website, who will be happy to meet you and see your drawings, and make your softies.  Some of them are from Australia, so if you’re Australian, this might appeal to you!

As for me, I’ll be sitting here, holding my head, and contemplating my next steps.

I will make my way through the wait list in my systematic way.  I expect some of you will have made other plans or changed your mind or even forgotten about Child’s Own, and I promise that I won’t be offended.  (For now, I have stopped answering new quote requests, because it just seems meaningless.)

The wait-list includes people who e-mailed between January 17 and February 22.  If you sent in a request around January 17, then you will hear from me within the next couple of days.

I am looking only for experienced and/or established softie-makers with experience making and selling their softies.  If you have an on-line soft toy craft business and would like to increase your exposure and commissions, then please contact me.

Thank you everyone, for your kind comments, helpful advice and suggestions. For the record:  I am not interested in going on Shark Tank or Dragons’ Den (I’m Canadian, eh?).  I’ve watched Dragon’s Den many times (great entertainment value) and I am very familiar with the set up and the investors on the show, and I am not interested in approaching them.

For pricing info and whether I ship internationally, please click on the FAQ on the horizontal menu bar above, ^ up there ^, just below the drawing of the happy goat.

Have a great week!

I am not the only person who can make stuffed toys from children’s drawings.  There are other capable crafters out there.   Come out you guys: don’t be shy.  Come and join this site.  Let’s turn this into a real movement.

Kally and her giraffe

Okay.   I am officially swamped.  Every time I turn on my computer, I get a hundred more e-mail enquiries.  Last night I answered some of the e-mails, but today, I got several hundred more.

My site has gone viral; people say that I’m on Pinterest; people are blogging about me. But  now I don’t know how long people will have to wait before I get to their order.  The 4-6 week turnaround time has just gone out the window.

If you sent me an e-mail or drawing ( I have seen so many sweet and funny ones ), please bear with me as I send out acknowledgements.  I don’t have the time to provide quotes right now, and I don’t know when I can.

I am a bit overwhelmed, but I am also very appreciative of all the enthusiasm and lovely comments people have been leaving me.  Thank you soooo much!

Okay, back to my e-mails.

Child's Own Studio is a place where your child and a craft artist, together, can create a keepsake to be cherished for a lifetime.

COPYRIGHT © All pictures on this blog are made or photographed by Wendy Tsao. Please add the link www.childsown.com or contact me before using one of my images. Thanks!